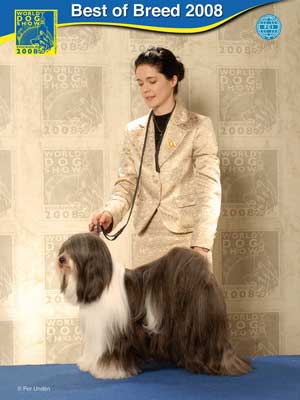 • Freddy is one of the first offspring of his famous father Ch Araki Fabulous Willy and for a while had to live in his shadows. In 2006 however he started to come into his own right and won his first C.C. and Birmingham National Championship show he quickly went onto gain his title at Three Counties Championship show and now had 6 C.C’s and 6 Reserve C.C’s. Freddy is a multiple Group Winner, BIS Winner and gained his International title with 23 Cacibs from 6 countries. Top Tibetan Terrier in Finland 2008. Sire of International Champion Araki Incognito