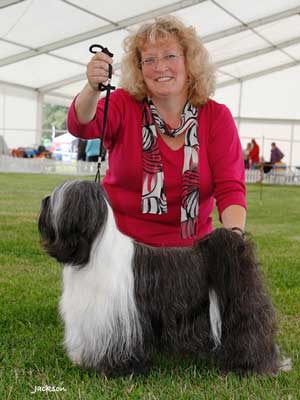 • ‘Lily’ started her showing career at six and half months old where she went Best Puppy in Show. This she repeated several times as a puppy.
• She qualified three times for the prestigious East Anglia Supermatch and on her first outing went through to the final rounds and eventually won best groomed dog in show.
• She gained her first CC at Blackpool in 2006 but left the show ring later in the year to have a litter. She came back into the show ring late in 2008 and in the spring of 2009 gained her second CC at Welks quickly followed by her third CC, with Best of Breed, at Blackpool 2009. A week later she gained a Reserve CC at Windsor at what was the largest entry of TT’s, with the exception of Crufts, for 2009.
• She is owned, loved and lives with Mike and Wendy Brandrick
• Bred by Ken Sinclair